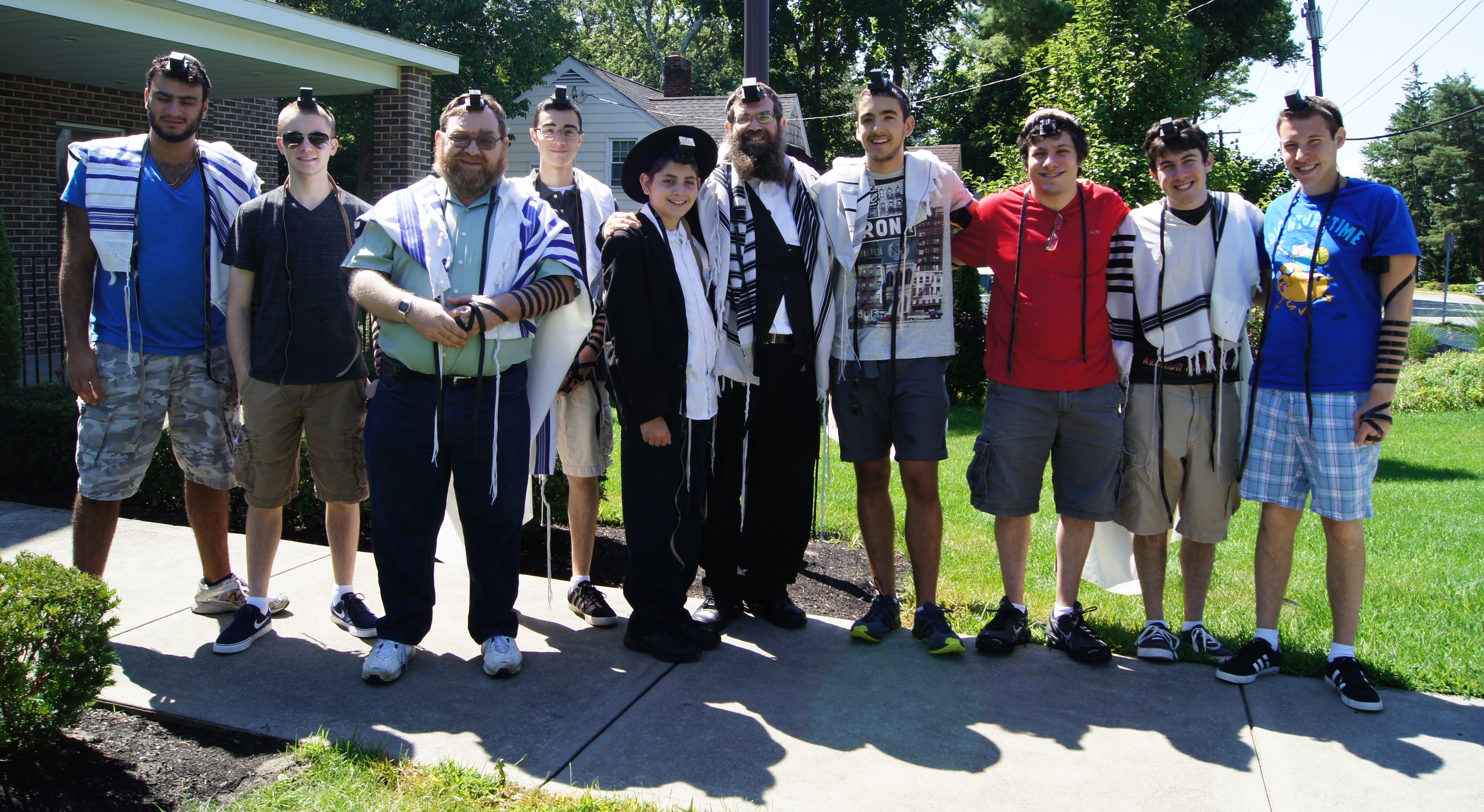 We had a tight but nice Minyan for the first Minyan Bagel Brunch of the Fall 2014 semester. UAlbany classes begin the day after, so not all regulars were back yet. As is our tradition, we took a post-prayer Minyan picture with Tefillin (cuz “You look great in Tefillin!”) this time outside in the warm sun, which we relish before the cold takes hold of Albany.

This picture is special because of how even the shadows reflect the Tefillin! and because it’s Scott’s last Minyan Brunch before he leaves Albany after six years of undergraduate and graduate school and much dedication at Shabbos House. And there are two new freshmen in the picture, even a day before classes even begin!

The new Talmud class wasn’t supposed to begin until the following week when everyone’s back but a freshmen student was eager to do at least a little piece so we did the first Mishna. It’s beautiful to see the eager interest in Torah study!

Then a group of Chabad Yeshiva students popped in. They were enroute to a friend’s wedding in Montreal and stopped in Albany to pick up a friend driving to meet them from Binghamton. And then some incredible Jewish/Chabad Geography went to work…

– Raizy’s brother-in-law Moshe Wolf from Chicago had a brother in the group, who you can’t miss it, looks almost exactly like his older brother Moshe.

– The guy from Sydney is a cousin of Raizy’s brother-in-law Chaim from Houston TX, and he’s also a second cousin to a student Zalmy that went to UAlbany.

– The Shtrucks boy from Vancouver BC has a shared uncle with Mendel, none other than the Moshe Chanowitz and family who operated Shabbos House from 1978-1988!

– Ben I. from Monsey’s mom is a teacher at the Chabad School in New City NY, and taught a few of the siblings of the Kotlarsky boy that was here.

– The Slonim boy from Binghamton was our son Moshe’s learning director at the Yeshiva Summer Program in Morristown this summer. Moshe gave him a special tour of the building, top to bottom.