This Chanukah had a lot of hype and energy about it due to the first day coinciding with Thanksgiving. See our 5 meaningful connections between Chanukah and Thanksgiving. This calendar scheduling allowed students to spent the first half of the holiday at home with their families, and us to the same with our own. See our blog posts for how we celebrated the FIRST NIGHT and the FIRST FEW DAYS OF CHANUKAH as a family at home and away with family. Here’ an inspiring personal story we heard from Raizy’s father. 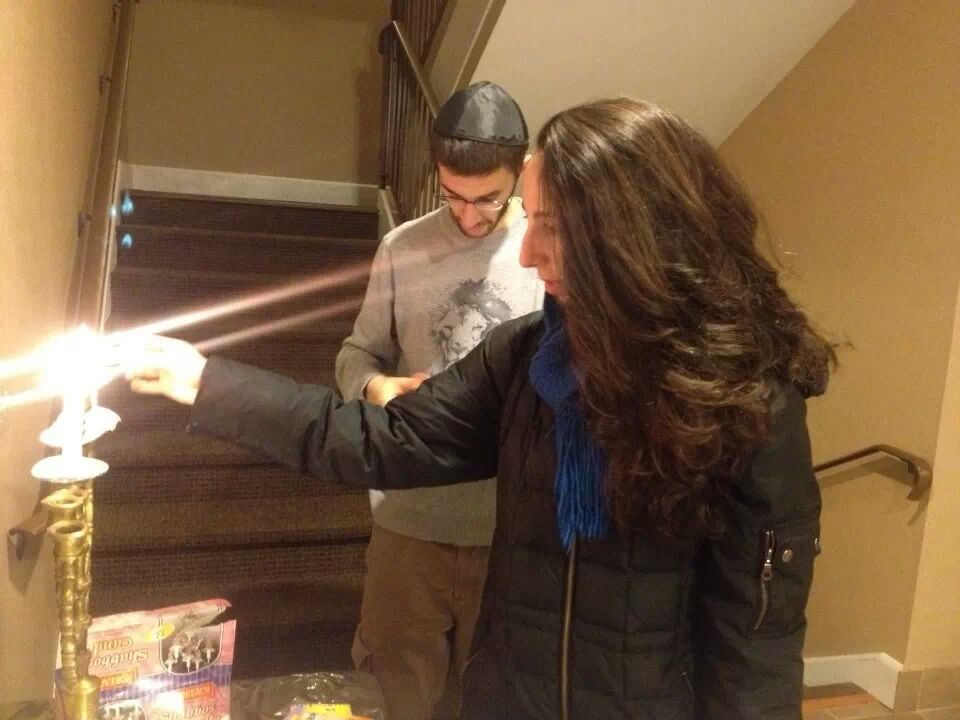 Students began returning on Sunday, and on Sunday evening quite a few came by to light the Menorah/Chanukiah. See our posts about the FIRST STUDENTS LIGHT on FIFTH NIGHT, and a marvelous spiritual photo captured that 5th Light. We and students have been posting Menorah lighting photos with the #sharethelights hashtag as part of a global effort to #sharethelights and be part of a a global spiritual spectrum of light!

On Monday we were out all day tabling with Hot Latkes, plus dreidels, choco-gelt coins and Menorahs and candles. Monday afternoon at 4:30pm, seven faculty members joined to each light a candle (the Shamash and 6 candles) on the all-new and very creative “MAJOR-MENORAH” as another way to #sharethelights! Later that evening, some students came by to light here, others lit at Hillel’s ChanuKraziness party at the Interfaith Center.

Instead of the usual Torah-Tuesday we had a CHANUKAH GAME-SHOW NIGHT, with points accrued according to personal and humorous questions asked, led by Rabbi Mendel, with some students inputting anonymous answers via texts that showed up on the big screen. Later, students used their points to bid for unknown wrapped prizes (mostly random stuff from dollar stores) which was a lot of fun for all. We also lit the Major Menorah again, as well as multiple small Menorahs, this time with seven lights!

On Wednesday, the 8th Night of Chanukah, Raizy coordinated (she’s been working on this on/off for several months now) the Maimonides School’s Annual Raffle-Auction. The Kochman’s cooked up a delicious dairy Greek dinner and 28 prize packages were drawn (Mendel’s emceeing was the straw that broke the camel’s back of his voice) and the event was a huge success for our kids school. Ben Z. of Shabbos House won one of the prize packages. One of the honorees for the Menorah Lighting at Maimonides was Ephy Carmel, a GE Engineer who was a commander in the Yom-Kippur War and emotionally recalled the Chabadniks visiting the front on Chanukah, boosting the morale, lighting Menorah, giving each soldier two coins from the Rebbe..

Later that Wednesday night we got home and there was a 8th NIGHT GIRLS NITE-IN! at Shabbos House together with UAlbany Hillel with a soap-making craft, Menorah lighting, discussions etc. Some of the boys gathered at the “316” the old Shabbos House on the corner, and later at night (after the kids got settled in) Mendel went over to hang out and schmooze with them.

Many bright and wonderful Chanukah Memories! May the warmth and brightness of the candles, the Jewish pride and joy continue to linger and inspire us long after the Latkes and doughnuts are gone.