Runaway roaming Buffalo – and our Passions 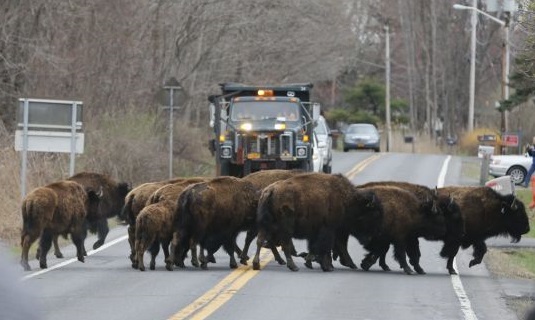 The big local news this Friday was about a herd of buffalo (technically “American Bison”) who escaped their farm in Castleton NY, swam across the Hudson River, ran across the NYS Thruway, and rampaged through woods and residential areas, before police and hunters from their home farm caught up with them in the southern part of Bethlehem, not far from Albany. See this Times-Union article for more on this story.

Many pictures were taken, flooding my Twitter feed. As the “Times Union” wrote, this event was tailor-made for Twitter. This picture of them crossing the road is by Mike Groll of the AP was from the Times-Union. It highlights the unusual absurdity of these big animals roaming across roads in a dense tightly knit pack. A small taste of how it was a couple of hundred years ago when buffalo roamed about in huge herds all over the Great American Prairie. 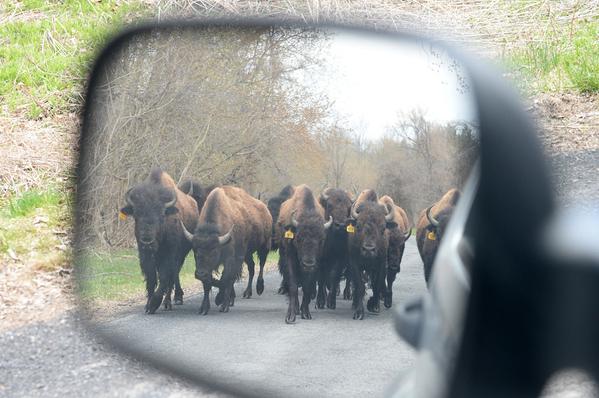 I also really liked Patrick Dodson’s (of the Daily Gazette) photo of the bison visible in his car mirror. I know Patrick, he’s taken photos of events at Shabbos House in the past. Not sure how comfortable I would have felt with these fast-moving and incredibly strong animals so close behind me! Patrick also has a great shot of them getting to the other side of the NYS Thruway.

Sadly, the excitement and drama over their escape and occasional sightings through roadways, woodlands and near neighborhoods ended with the farm family dispatching hunters under police supervision to take down the animals. A livestock expert from the Cornell Cooperative Extension advised police and explained that buffalo hide is too thick for tranquilizers to work properly, especially on a pack of animals running about. Even farmed bison are still wild at heart, and these beasts are huge and insanely powerful, and can even outrun a horse for short distances. And there was obvious concern for public safety as they ran through inhabited areas and across roadways.

So what’s the life message for us?

Some of you may be familiar with Tanya’s “Animal Soul” that is within each of us. The Rebbe Rashab’s Kuntres Avodah spells out that various animal types represent different personality traits within us, such as the docility of a lamb, the stubbornness of a goat, the passion of a bull. It works both ways. Sheep-types might too lazy or unambitious to go out and do much damage, but the same trait keeps it from doing much good as well. And the passion of a bull has incredible potential but only when it is focused and channeled correctly, otherwise it can cause huge trouble and aggravation.

Bison back at the farm can be manageable they say. They’re not as easy as keeping a dog or cat at home, but you can set it up in a controllable way. It’s somewhat workable. But once they get out, go off the farm, go wild, build up momentum and stampede, especially in locales where they can cause serious danger, then there’s often only one option: the nuclear option.

We all deal with negative passions, to one degree or another. Often, it’s in the manageable mode. We can modify, cut back, deal with it and keep it in check. That’s when it is within a controllable, manageable mode. Yes, it takes work, but we still can trust our internal systems and control.

But sometimes that passion gets out. It gets wild and irrational, it builds sustained momentum, its out in places where it can do real harm to us and others. Then we might no longer have much wiggle room, there’s no time for negotiations and justifications. We have to do whatever we can to stop it, or get help quick.

Take Alcohol addiction for example. Some people drink with some moderation, they kind of know their limits, they have a way of dealing with it. It might still be risky behavior, but its basically manageable. (People are not always the best judges on their own behavior, but you get the idea). But if that goes too far, if it crosses certain lines, if this behavior becomes uncontrollable and unmanageable or is a danger to the drinker and others – then something drastic must be done. You may need inpatient treatment, and get to the point where you never take a drink again. Even in moderation.

Another example can be unhealthy relationships. Or anger management.

In Chassidic spirit I usually like to keep the focus positive. And some of this can be turned around for a positive message as well. But the sad ending, with limited options, of this Friday’s local runaway buffalo saga highlighted to me the dangers of runaway passion.