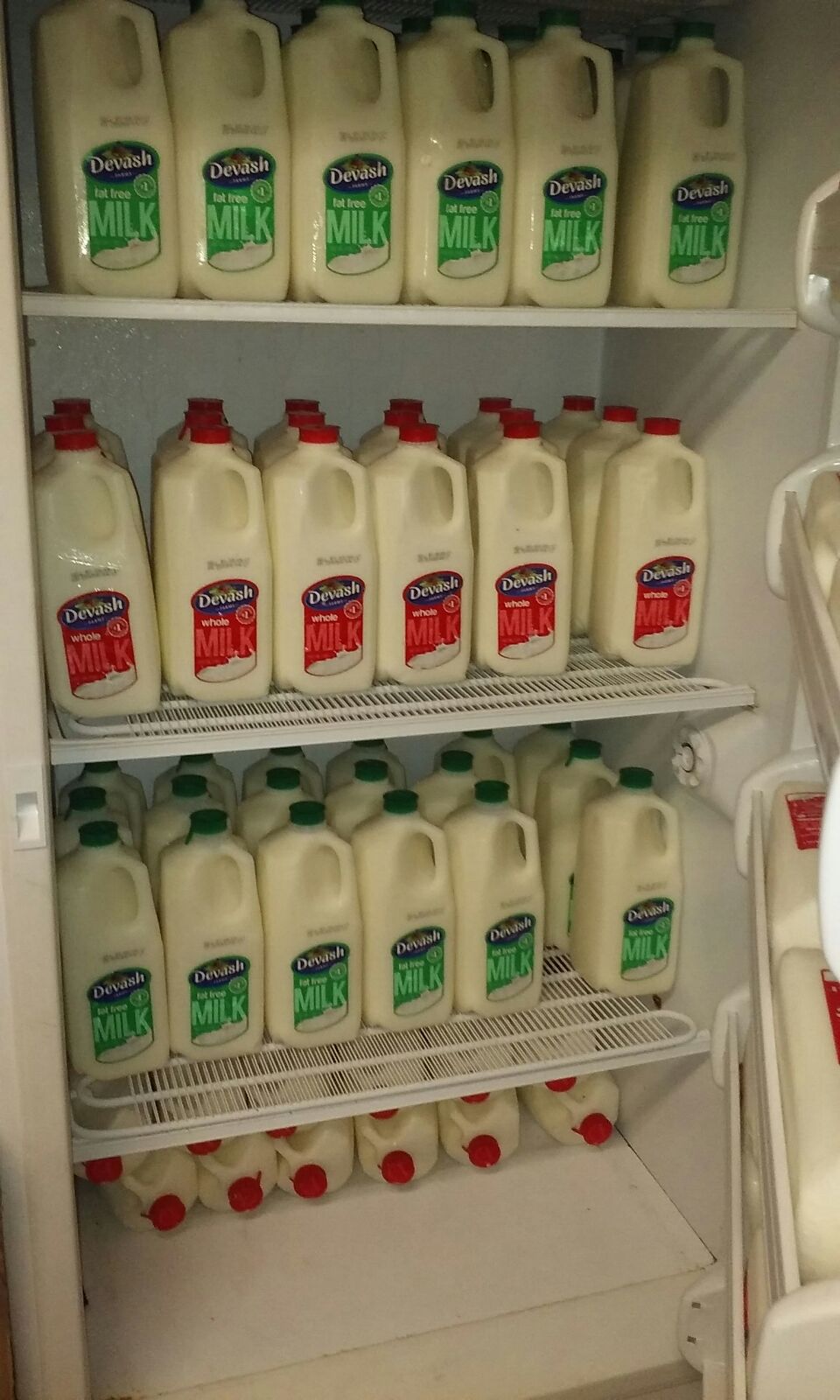 One hot summer Friday we get a call that the refrigerator system broke down on a large tractor-trailer truck laden with Kosher Chalav-Yisrael (a super-Kosher dairy tradition that we observe) milk and they have to get rid of the milk quickly. We go through a lot of milk, and know others who can use it, so why let it go to waste? So went and picked up 40 cases of milk. While we were there, the truck was being repaired, so all of it may not have gone to waste, the milk was still very cold, but that’s a story for someone else to tell.

There were 1,000 cases of milk on that truck, but not one bottle of “blue milk”. It was all red or green. Red = Whole Milk, Green = Non-Fat or Skim Milk, and the Blue is usually 1% or 1 1/2% fat which is a nice Goldilocks compromise, not too thick and heavy, but not too thin or light either. Our family likes the blue milk, and we almost never get the red or green.

But there was no blue milk on that truck, so red and green it was. After all, beggars can’t be choosers! We can water down the red, make chocolate milk out of it, get used to the green in coffee – no complaints. By the time Shabbat began we already gave out 6-7 cases of milk.

Let me digress for a second, to an email we sent out with a post we put up about “The Three Weeks”. This week began the period of quasi-semi-mourning of “The Three Weeks” each summer when we remember the Jerusalem Temple. The post has links to information, history, insights and observances. I included some of my favorite Rebbe talks about the destruction of the Temple, a Chassidic insight into the mixed feelings at this time, and lastly, a link to a YouTube playlist of “Sefirah-Music” which are Jewish acapella groups for this time when the tradition is not to listen to live or some say instrumental music.

I wrote up the post with all those links and then sent out the email to alumni and students. And then I wondered if I should have included the last link about the Sefirah-Music. After all, the vast majority of students and alumni on our list are not observant of that, and it isn’t a major Mitzvah like Shabbat or Torah study that’s important to promote. I thought it might be too heavy or religiously overwhelming…

And soon after that I got a FB message from a student. He listened to some of the Sefirah music that I posted a link for and was surprised to find that one of the acapella songs was the theme music for Friends. (Indeed, a good deal of the acapella music is borrowed or spoofed from popular secular songs, like the Maccabeats “Bo’ee vShalom” is from “Halleluja!”).

But wow, I took a deep breath. I couldn’t believe it! This guy opened the email, clicked on the link to that post, and then clicked on the link for the Sefirah Music – and listened to a bunch of songs down the playlist to reach that Hebrewized Friends song… Most people don’t get that far from an email that we send out! That was quite impressive, and touching…

Generally, I think of our approach at Shabbos House to be like blue-milk. We don’t like to water down Judaism until it has little or no flavor left, we like to share the creamy richness of Judaism! So the green skim-milk isn’t our style, it’s too thin, not enough flavor, it doesn’t have the richness. But the red milk isn’t our style either. We don’t like to be overbearing, too heavy, too thick – we might enjoy that way ourselves in our personal Jewish lives, but feel that’s too much to share with students, it can be too intense or overwhelming. So we stick to the blue milk style, just enough richness and flavor, not watered-d0wn, but not too heavy either.

What this student’s “Sefirah Music” feedback showed me is that sometimes, in the right doses and context, a little red-milk Judaism is OK!