The Cloud over Students

Nowadays when we speak of The Cloud (with a capital C) we mean remote data computing or something. But this is about a different type of a cloud (also pervasive and incredibly important) that may be very much part of our lives, no matter our age, our role or occupation. 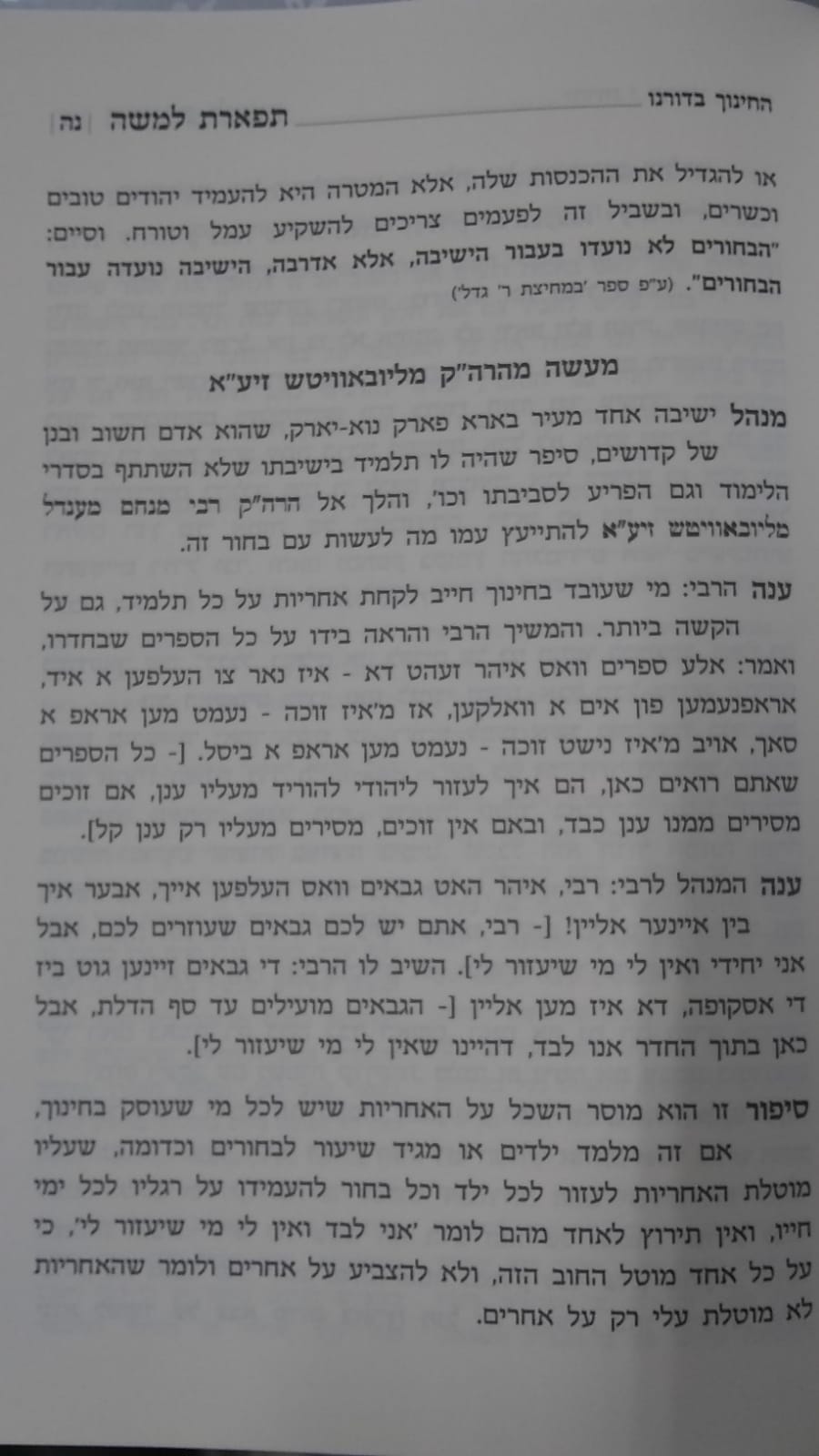 I’ve never heard this story before, but it was printed this year in a Hebrew book (published this year: 5779/2019) titled “Tiferes L’Moshe” by Rabbi Yirmiyahu Katz (known for his national work on Mikvahs) in a chapter on Jewish education. Rabbi Katz heard this story from a prominent Boro Park educator, a scion of a Chassidic dynasty.

Once this educator had a specific challenge with a certain student who would not follow the Yeshiva guidelines and structure and was also a negative influence on others. He came to the Lubavitcher Rebbe to discuss this (it appears that this was in the days of private discussions called “Yechidut”).

The Rebbe told him, “Those who are involved in education must concern themselves with each and every student, even the most difficult students”. The Rebbe pointed to the bookshelves of books lining his study, and said: “All of the books you see here are only to help a Jew. To remove a cloud that’s hanging over him. When we merit, we might be able to dispel a lot of cloud. Sometimes we only can dispel a little bit of cloud.”

My friends and I (family, too) had never heard this story before, and also never heard this particular expression of the Rebbe. But the underlying message is certainly typical of the Rebbe. We can’t absolve ourselves of helping others, we must be there for each person, and whether we can do a lot or a little for that person, doesn’t matter, we still must do our part.

And Rebbe’s understanding (as good educators must see) that this child’s issues were not merely misbehavior or disrespect but due to a internal emotional “cloud” a burden or weight that this child must have been dealing with.

The imagery of a cloud struck me. Sometimes you see dark clouds gathering over someone in a comic strip. It’s the opposite of that lightbulb going off. Whether this was the Rebbe’s exact expression or not, it is certainly true of (some) kids (as in the story) and even true for adults.  Think of the cloud as a gloomy hovering, an emotional weight over them, a sense of anxiety or foreboding, a darkness clouding their clarity, blocking their bright sunshine, a cloud that can rupture and burst open at anytime… And that the teachers role may be to help get rid of that cloud, mostly or partially, or maybe only to dispel it a little bit. Let a little ray of sunshine in. Give the kid some hope, some uplift, a break in his or her clouds.

It so happens (and everything is for a reason!) that I found out about this story (via family Whatsapp) during the period of semi-mourning known as the Nine Days, just before Tisha B’Av (the darkest day of Jewish history). You could say that an emotional cloud weighs over the Jewish people during this time. Our goal isn’t to wallow in the cloud, but to work to dispel it, even it allow one more ray of spiritual sunshine to shine through and illuminate. In a time of year when exile is at its heaviest, is a time when we ought to be hoping and working towards redemption. And even if not all the cloud at once, at least one bit of cloud at a time.

It is hard for me to see the Rebbe saying (especially with Rebbe’s style and tremendous positivity bias etc) that the purpose of all of Torah is to remove dark clouds that hover over us (though this is an important reality for many of us) but perhaps in context of this particular conversation it can be better understood.

Of course, all this is metaphor and not all clouds are dark, and even dark clouds have their purpose and we couldn’t live without their life-giving rain, but that’s a story for another time.