This simple (but brilliant!) picture book by Mac Barnett and Jon Klassen is incredibly rich and deep. I think it is one of the great children’s books that is a wonderful parable to illustrate an aspect of a fundamental Chassidic concept called “Bittul”.

Let’s take a look at some of the key points in the story. Square is square and his job is to take square blocks out of a hidden cave and pile them up atop a hill. He doesn’t do anything to the blocks other than push them along.

But Circle sees him with a big square block and thinks its a brilliant sculpture he created of himself (which it is not) and wants him to do the same for her. He tries to explain that he isn’t a sculptor and the blocks just come that way, but she hears nothing of it. He wants to do it for her, so he gives it a try. 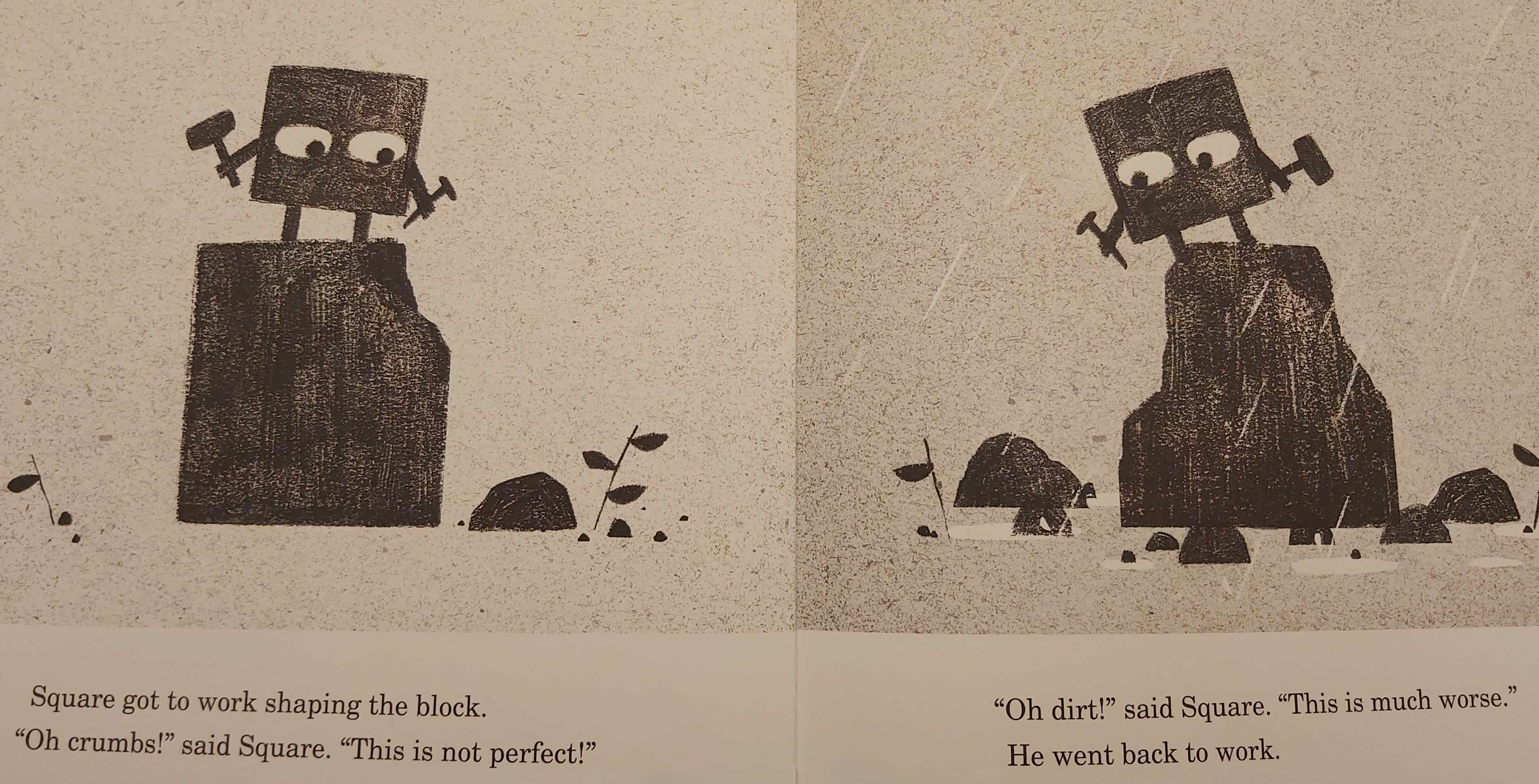 He didn’t see himself as a sculptor. He says of himself, “I push blocks, I don’t shape them.” But despite that he gives it his best. He starts off with one of his square blocks and tries chiseling away at it, but making a perfect circle is no easy task. He simply can’t do it. He worked at it all day, trying and trying, chiseling and chiseling more of his square block. But he got nowhere. Just more and more rubble. It was frustrating.

But he wouldn’t give up. He didn’t see a way to make it work, but he kept trying. It was raining, it was dark. He had carved the whole block away. He insisted that he would stay up all night to figure it out and make it right. But Square fell asleep in the wetness amid all that chiseled rubble.

In the morning Circle came to see his work. She peered into the water gathered inside his chiseled pile of rubble and saw her reflection. She thought it was magnificent, it was beautiful! It was perfect!

Often we think the goal is to accomplish, to create, to make something. But sometimes it is more about creating a space for someone else to shine. In a relationship it is not always about what you can do and what you can be and what you can contribute, but how open you are to letting someone else into your life, how good of a listener or shoulder you might be, how you hollow out your own ego to make room for the other.

True, in this story, Square was unable to create a sculpture of Circle, no matter how hard he tried. But his eager, determined, selfless efforts (inadvertently) created a space, a void, a setting and a platform in which Circle could be reflected, and in which Circle could shine. And sometimes that’s the most important thing we can do for others.