A day or two before Shabbat, the Wordle word was LOWLY – not the easiest word, with two L’s and a Y.

What comes to mind when you think of lowly? Down at the bottom, in the dirt, of low-rank or inferior, maybe a bad grade. Usually, lowly carries a negative or certainly less than ideal connotation.

But not in Chabad! To us the word lowly conjures up our spiritual focal point and destination, the purpose of existence, our sense of mission. Not EVEN in lowly places, but SPECIFICALLY in the lowest world and lowliest places. The Chassidic term (originally from a Midrash) for this is “Dirah B’Tachtonim” G-d’s desire to have a spiritual dwelling within the physical, to bring heaven down to earth, for G-dliness to be found and revealed in the lowliest places. 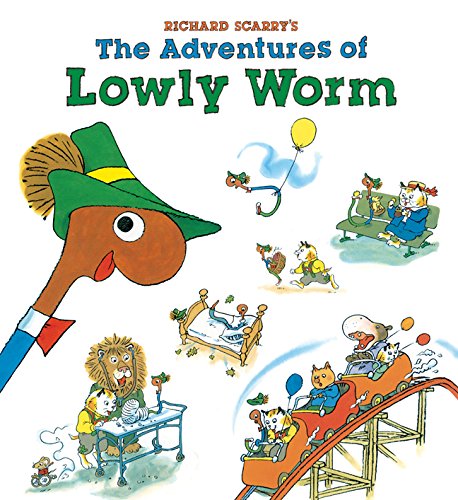 And the Wordle word LOWLY and its Chabad-esque connotation, got me thinking of “Lowly the Worm” in Richard Scarry’s Busytown books. I’ve seen that Mr. Scarry’s wife has said that Lowly was his favorite character creation.

Lowly has his limitations. He is one of the thinnest and smallest and probably among the weakest of all of Richard Scarry’s characters. He has no hands or feet (he has one foot). But all this doesn’t stop him from driving cars or flying a plane, from going places and getting things done. Lowly is active and alert, engaged and productive. Lowly Worm (with all of his inherent weaknesses and physical limitations) comes across as cheerful and positive, with a can-do and get-on-it attitude.

Sometimes we find ourselves in lowly circumstances. Sometimes we may feel as limited or weak or small as Lowly Worm. But channel Lowly Worm’s spirit! Lowly doesn’t see himself as lowly, he doesn’t let lowliness bog him down or make him feel like dirt. Lowly carries himself with dignity and respect, Lowly has a strong sense of mission, Lowly has purpose. Lowly is a main character!

One doesn’t need to be big and strong and ultra-capable or super-talented, or richly endowed with resources to feel that you can make a difference in this world. And we don’t have to wait for ideal or perfect situations to align to have spiritual experiences, on the contrary, it is specifically in the lowly that we have a greater sense of mission and where “Dirah B’Tachtonim” can be best fulfilled.