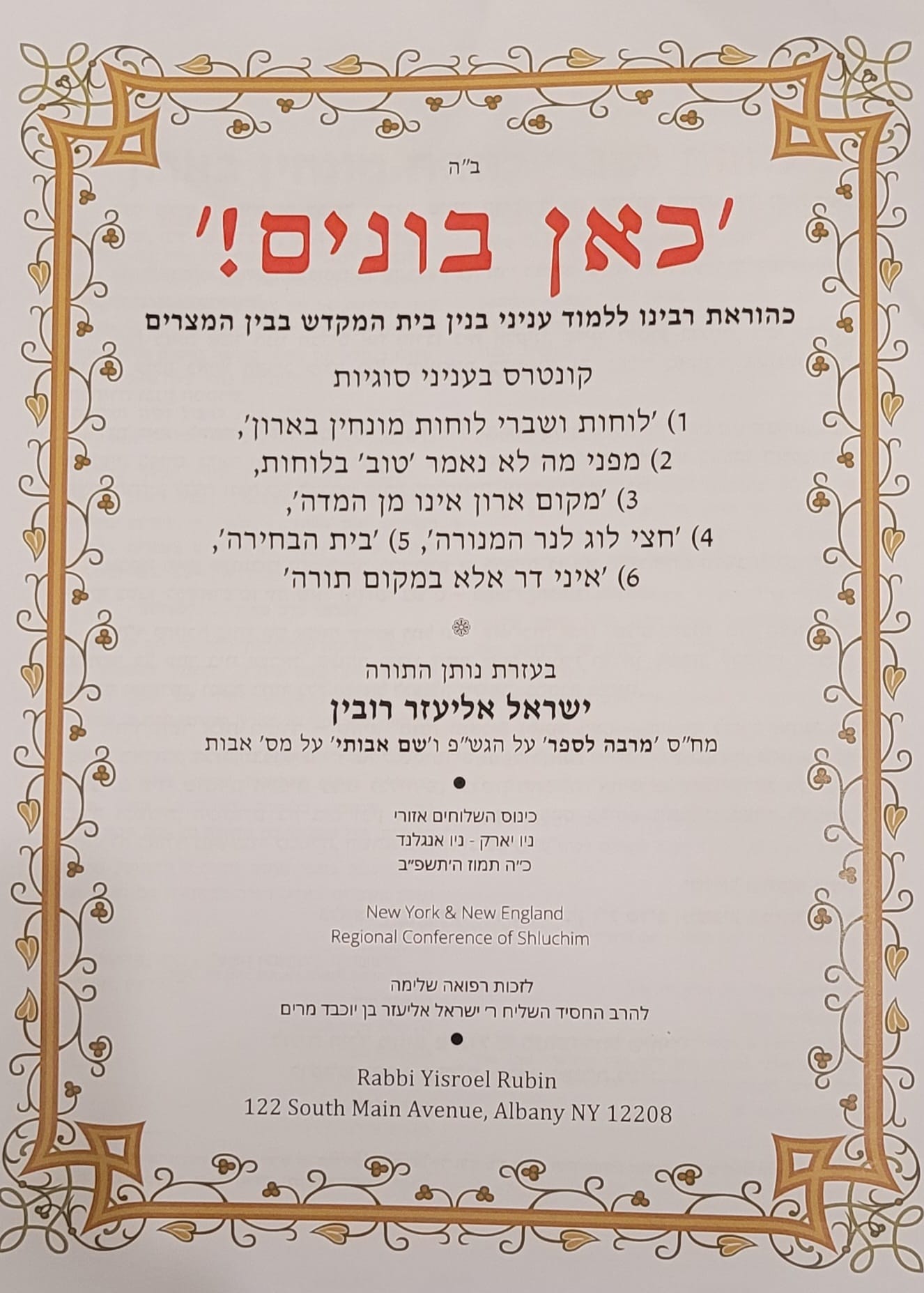 It is my father’s (Rabbi Israel Rubin’s) custom to print a booklet (a “Kuntres”) of his original Torah scholarship in honor of special occasions (one day may this booklets become a book!).

Being that he was unable to attend this year’s 5782/2022 regional Chabad Kinus conference in Ossining NY due to his illness & recovery, we brothers decided to reprint this earlier booklet of his scholarship. We chose the booklet of collected essays on matters pertaining to the Beit HaMikdash, since the Kinus was during “The 3 Weeks” when it is customary (and especially encouraged by the Rebbe) to learn about the Jerusalem Temple.

This is the time of year when we commemorate 3 weeks in the summertime, starting with the fast-day of the 17th of Tammuz when the Jerusalem walls were breached by the enemy and culminating in the fast day of Tisha B’Av (the 9th of Av) when the Jerusalem Temple(s) were destroyed. (This year 5782/2022 both these fast days fall on Shabbat and the fasts are postponed for the next day).

For this reprinted booklet, we kept the old title he once used for this booklet: “Kahn Bonim!” (= Construction Zone, or Under Construction).

When we told him about our idea of reprinting the booklet he said he hoped people would appreciate the title, saying that the Rebbe would love this title!

(Aside for a general sense about what the Rebbe would appreciate, my father once received positive feedback from the Rebbe regarding something very similar, see that story here: “Tisha B’Av has Two Sides to it”).

I thought any Chabad Chassid would get it right away. Figured it would be obvious. After all this was very much the Rebbe’s style, always with a positive twist, to see this period as a time of Construction instead of Destruction. But my father was right, not everyone got it right away. But once we explained it, it clicked and connected. 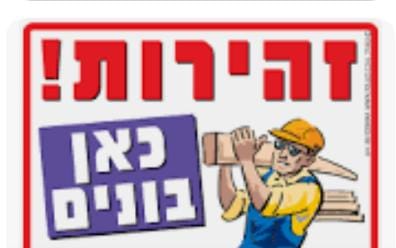 When I put this title and my father’s question “would they get it?” on a whatsapp group of friends, the first response I got was this (red-bordered) illustration which reads: “Warning/Caution: Construction Zone!”

Indeed, while a construction message, this red-bordered illustration is more in-line with the caution and concern and subdued feelings that is traditionally observed around the time of the “3 Weeks” and the “Nine Days”.

To be sure, the halacha (Jewish law) mandates certain observances of semi-mourning such as no meat or wine during the Nine Days (with the exception of Shabbat and when a Talmud siyum is celebrated), and during the 3-Weeks we do not celebrate weddings or listen to (live) music, among other things.

We do very much miss the Jerusalem Temple and all that it stood for and all that stood with it. Chabad certainly follows Halacha and all of these restrictive and semi-mournful observances.

But that’s not the message my father was looking for with this “Kahn Bonim” title. And its not what he envisioned the Rebbe especially enjoying and appreciating. Yes, we mourn, but the attitude in Chabad, and Rebbe’s vision is always more of an uplifting one. 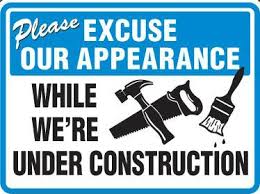 Instead, of restraint, caution and concern, to better capture the spirit of my father’s “Kahn Bonim” (Construction Zone or Under Construction) title, think of it more in the spirit of of this blue-bordered illustration that reads: “Pardon our Appearance, We are Under Construction” that sees the “3 Weeks” & the “9 Days” not (only) as a time of destruction, but under construction!

Yes, construction-sites can be messy and incomplete, and some areas are off-limits and out of use. Construction zones may require hard hats and hard work, its no place to lounge around. But the vibe and spirit at a construction zone is one of accomplishment and achievement, looking forward not looking back, of positive energy not a negative one, it is more joyous, less mournful.

Excuse our appearance recognizes that we’re in an imperfect state, in-between things, not fully functional. The space might be limited or messy, certainly (far) less than ideal. Construction can close off rooms, close off a lane, or even shut off water. But its not a negative. It is part of a positive, constructive process.

The Rebbe sees the construction zone mess via a figurative reading from the laws of Shabbos, “destruction for the sake of construction” is considered construction, even if it doesn’t appear that way at first. To the Rebbe, the focus of 3 Weeks & 9 Days was indeed “Kahn Bonim” we’re seeking & working on rebuilding the Temple! We’re working towards redemption, our efforts are forward and future focused, not only mournfully dwelling on what was lost in the past.

For more on the Rebbe’s “Positivity Bias” see the book of this name by Rabbi Mendel Kalmenson, which is also available chapter by chapter of Positivity Bias online at Chabad.org.