The Headphone Jack in the Bible 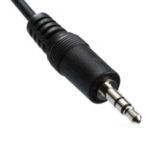 Apple made big waves this week when they announced that they will be removing the ubiquitous and universal headphone jack from their newest iphones and replacing it with their proprietary “Lightning” port.

Without getting into the pros and cons of such an audacious move, a tweet by @abekay caught my eye on Twitter, from the “Mashed Radish” blog on everyday etymology: “Why is it called the Headphone JACK?” What does Jack have to do with it? Why Jack?

I haven’t verified Mashed Radish’s research but it is fascinating that he traces back the term to Jacob of the Bible, and his supplanting (taking the place) of his brother Esau. Hence, since the days of the Industrial Revolution or earlier, a Jack has been a term for a gadget or device that takes the place of a person. Think Jack of All Trades, or the Jack that lifts a car, the turner of a roasting spit is also called a Jack.

Let me add another bible story about Jacob that may fit the headphone jack (aka audio jack) as well:

You know that time that Rebecca encouraged Jacob to dress in hairy animal skins to “steal” the blessing that was intended for his hairer brother Esau? Isaac, who was blind, felt his son and said: “The voice is the voice of Jacob, but the hands are the hands of Esau”…

Voice is the voice of Jacob – hence the Audio Jack!

Indeed, throughout most of our history, Jews have been best known for their voice and not their hands. Jews are better known for ideas and innovation, persuasion and discussion, articulation and expression, prayer and song — than for physical strength or force.

But sometimes, Jacob needs the hands of Esau. Like in the story of Entebbe,which will be celebrating this week with a special speaker, a commando in that daring hostage rescue raid. Israel couldn’t talk their way out of that one. There was no one to talk to. They went in with planes and rescued those innocent hostages with force.

(Our daughter Mushky said: “That was a great plug!” for the Entebbe speaker…)

And one last thought about Jacob and the headphone jack, audio jack or even phone jack. It’s all about transmission. The earliest use of the audio jack goes back to days of the manual phone switchboards, when phones had to be manually linked by an operator using a switchboard and these jacks worked wonders. (Think about that for a second. The excellent design of these timeless and universal jacks have not changed much in 130 years! It might be one of the only pieces of technology that could be recognizable if your great-grandfather – or his father – would come to visit today).

But back to the audio transmission, here’s another explanation of this Jack being named (indirectly) for our forefather Jacob. Of all the forefathers, he’s the one with the best transmission. ALL of his children inherited and continued his vision and values. Not so with Abraham who had Ishmael and Yitzchak who had Esau, it is said about Jacob that his family was wholesome (despite their well-documented quarrels). He had better transmission, clearer signal.

Regardless of what Apple will do, or whether other manufacturers will follow suit, or how long the Jack will last or what adapters you might need – there are timeless messages about Jacob our forefather and the lessons in it for us.